Automated wordcount: 1824
This was file was automatically generated by a google docs scraper, intended for use with e-reading devices. If you wish to have this removed from this list, email ra.llan.pcl+complaints @ gmail.com. 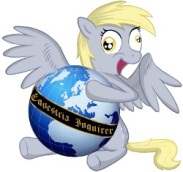 The scientific community and ponies pretty much everywhere are baffled by every day waking up to discover that beings bearing the likeness of the combination of a platypus and eagle, commonly referred to as platygriffs, continue to exist.

“You’d think that one day we’ll wake up and realize, you know, logic and reason define this world we live in. And then you’re like, bam! Platygriff. Shakes me up every day,” quoted Ponyville resident Spike.

While there exists a multitude of semi and overtly fantastical creatures in Equestria, such as griffons and zebradiles, platygriffs defy all rational definitions of nature.

“All creatures in the chimera genus have reasons for their combinations. The common griffon evolved for defensive reasons,” quoted Twilight when asked of the genetic heritage of these combined animal animals, “The squirrelopotamus evolved to survive in the mile-high trees where they thrive. But I can’t see any reason why a platypus would ever evolve to have eagle-like features.”

“I like to call them platyflies!” quoted Pinkie Pie, whose opinion on this subject was not requested.

Several scientific minds with less than stellar bearings on lucidity have argued that chimera combinations like that of Discord justify the creation of platygriffs in nature. However, Discord is the personification of disharmony and chaos. Adding him to scientific theory is the biological equivalent of dividing by zero.

A platygriff residing in Ponyville, known only as “Bob,” had this to say on his species’ shocking ability to remain more than simply a figment of our deranged imaginations, “Meh. Life’s pretty messed anyway, you ask me. Folk like us are just one more thing, you know?”

Ponyville resident Pinkie Pie has unveiled a new hair straightening product that is the simultaneous cure and cause of a variety of problems for ponies suffering from untamable manes. Marketed as Depression: the Ultimate Hair Straightener, it seems Pinkie is able to render anypony’s hair completely flat and split-end free simply by causing unbearable feelings of sadness and self-doubt.

“I know nothing but suffering!” stated another.

A third customer could not be reached for comment as they were running away with tears of abject despair while their evened and refined follicles waved like a billowing flag.

“I can assure you that this treatment works,” Twilight Sparkle quoted, “My hair got tangled and downright crazy one day. All I had to do was be told Princess Celestia would send me back to Canterlot without my friends and my hair straightened instantly.” She then sniffled a bit and quietly excused herself from the interview.

Pinkie Pie has been seen bouncing around with absolute glee that ponies are enjoying their hairstyles. Her hair is, of course, incredibly puffy and curly. “That’s exactly how I came up with it!” Pinkie quoted, “I’m the happiest funnest and partyist pony in Ponyville and I have the poofiest hair. That must mean the happier you are the poofier you hair is, so the sadder you are the straighter your hair is! It makes perfect sense!”

Despite Pinkie Pie’s logic being absolutely false, the treatment continues to show results. Unreliable Sources have confirmed Pinkie Pie has added a new treatment that will render any pony clinically insane but also guarantee to make their hair puffy and curly.

AN UNBIASED SCIENTIFIC EXAMINATION OF PARASPRITES

In a completely unprecedented act, Princess Celestia, ruler of the world of Equestria, has announced she and a small group of loyal followers will journey to the land of Earth and visit the nation of China. This comes as a total surprise to nearly all ponies as they were first of all not aware that a planet known as Earth existed, much less that it had a nation with over a billion people in it who were eager to greet the all-powerful alicorn.

“The princess is making every effort to reach out the hoof of friendship to all creatures both real and imaginary,” quoted Celestia’s press secretary, Tella Prompter, “The truth is they don’t know about ponies, or that friendship is magic, in China, and the princess wants to address this. We look forward to greeting the Chinese people with open hearts and minds.”

Critics of the visit point out various human rights atrocities committed by the very government Celestia will be offering “friendship” to. The princess has responded by saying these are the exact people who need to see friendship most of all.

Of course this compromising tone has not been well received by all members of the public. Some cite comparisons between the Chinese one party system and centralized economy to the Celestian single monarchy and concentrated ability to control the movement of the sun.

The only major policy issue to be addressed, however, has to do with Chinese concerns over the weaponization of ponies. As such, Rainbow Dash has been barred from coming, as her presence would risk the outbreak of thermonuclear war.

In an even more unprecedented move, Princess Celestia has invited press to join her on this journey, and extended a personal invitation to the staff of the Equestria Inquirer! We have, of course, accepted. Join us all week on Twitter at @JoeStevensInc for live coverage of the Princess’s visit!

PERFORMANCE OF “EQUESTRIA SIDE STORY”

It was the worst! Possible! Thing!

Stories Written by You!

THE PHYSICS OF A SONIC RAINBOOM

It has come under scrutiny lately the kinetic release of energy known to the scientific community as a “Sonic Rainboom.” The destructive nature of this explosion has created responses such as outright fear on the part of the Equestrian military, who have denounced the maneuver as a weapon of mass destruction, to mass confusion that this is a traditional explosive reaction. My findings have proved that the nature of this sonic rainboom is far more simple.

While normal chemical reactions result due to the destructive potential of a substance multiplied by the mass of such substance, a sonic rainboom is the result of a reaction combining the volume of a substance known only as “friendship” multiplied by the velocity of that friendship. Of course, this limits the reaction to a truly destructive explosion. As it is not, the theory is incomplete until one adds the negative kinetic variable known as “hate.”

Therefore, the equation to sum the explosive potential of a sonic rainboom is friendship (F) multiplied by velocity (V) subtracting hate (H), or <3=FV-H.

The more friendship is added to a high velocity pony, the greater the reaction, resulting in Rainbow Dash’s ability to create a massive explosion. However, risk of aggression is inherently impossible with a sonic rainboom. Any desire to destroy would be represented by hate, and subtract from the explosive potential. Therefore any attempt to use a sonic rainboom in a hateful manner would nullify all potential for actual damage. This is why its destructive nature can only be used in positive manners, such as demolishing an unwanted barn or shattering rock to reveal hidden gems.

This discovery has cleared the use of the Equestrian military’s classified “Orbital Friendship Cannon.” Capable of firing sonic rainbooms on anyone who hates, this attack will result not in a detonation of deadly kinetic energy, but in a harmless and soul-rending joyful display of color that will negate any hate in a given radius, replacing it with rainbows and paralyzed haters clutching their hearts for the adorableness.

The Orbital Friendship Cannon may be classified, but I’m told that Dragonymous has leaked the plans and posted them to the public. Worry not, ponykind, this may lead to the inevitable defeat of the entire world, but it will be with love and tolerance. Now if you’ll excuse me, I have to love and tolerate the bejesus out of my neighbors.

Hi there, um, thanks for reading this by the way. I know it’s a long paper and most ponies don’t like reading advertisements. I mean, ads aren’t very fun are they? But I guess the paper has to make money somehow. I know they want to say thank you, too, so I’ll just, oh dear, I haven’t even gotten to my ad yet.

If you’re still reading this, thanks again, I would love to give you a massage. That is, only if you didn’t want to do something else. We can get a smoothie or something but I’d rather give a massage. I don’t like to brag but ponies and bears tell me I’m a very good masseuse. Even dragons will come for massages, except that’s mainly spike and he’s just a baby. Oh, that wasn’t deceptive was it? I know a lot of advertising is deceptive and I would hate to think that ponies think I’m trying to deceive them into buying a massage. I would never do that.

So, please come to my massage therapy center in Ponyville. Thank you.

NEXT WEEK IS THE ALL-FREELANCE ISSUE!

We’re headed to China with Princess Celestia! As such, the staff is handing over the keys to the freelancers of Ponyville. This won’t end in tragedy, right? Course not.

Issue #10 will be entirely fan-submitted and freelance content! Just make sure and lock up the EI office when you leave. And mind the steps. And the coffee maker’s on the fritz. And don’t taunt the haunted refrigerator.

You can still submit for the All-Freelance issue by emailing freelance articles to [email protected]. You can also follow us on our journey with Princess Celestia’s state visit to China on Twitter at http://twitter.com/#!/JoeStevensInc.

Note: updates will be irregular as Twitter is illegal in China. That won’t stop us, though, so we look forward to breaking through the great firewall of hate and delivering friendship across boundaries both fantasy and reality. Just don’t tell Celestia. She might take away my iphone.