Automated wordcount: 1341
This was file was automatically generated by a google docs scraper, intended for use with e-reading devices. If you wish to have this removed from this list, email ra.llan.pcl+complaints @ gmail.com.

Early one morning, before the sun had even risen, Twilight Sparkle was gazing at the sky with her telescope when a streak of light caught her attention.  “Oh wow, Spike,” she called out to the sleeping baby dragon. “It’s a shooting star!”  She watched in amazement as the ball of fire hurtled through the atmosphere.

Spike briefly stirred in his bed.  “That’s nice,” he muttered before rolling over and going back to sleep.

“You know, I’ve always hoped that one day Ponykind would reach out to the stars,” Twilight continued talking excitedly at her sleeping assistant.  “And I’ve wondered what kinds of life we might find out there.  Maybe we’ll find new friends the likes of which we couldn’t even imagine.”  Twilight sighed dreamily as the burning object disappeared behind a cloud.

Hundreds of kilometers above Ponyville, Twilight’s “shooting star” was screaming insanely as the heat from atmospheric entry cooked it metal exterior.

Inside the echoing halls of a strange space station, metallic voices screamed.  “THE DOCTOR IS ESCAPING!  PURSUE!  PURSUE!”

“ALERT!  THE STATION HAS BEEN SABOTAGED!”

With an explosion like a nuclear blast, the station was vaporized instantly.  The only debris left was a single golden pyramid shaped hunk of metal.  It hurtled end over end as its eye-stalk and plunger arm waved around pitifully hoping to find something to halt it’s endless journey into the void, screaming all the while.

“HOVER SYSTEMS DISABLED!  COMMUNICATIONS WITH DALEK FLEET DISRUPTED!  NO WAY TO STOP!  I AM LOST!  I AM LOST!”  A small series of orbs on it’s lower skirt region glowed briefly before fading into darkness.

Inside the cottage, Fluttershy awoke from the impact with a start, falling out of bed.  “Oh my goodness,” she whispered as she ran to the window.  Cautiously peeking over the rim, she saw the smoking metal shell sticking out of the crater in her front yard.

Running down the stairs she addressed the small bunny looking up at her from the bottom of the stairs.  “Stay here, Angel Bunny, until I’m sure it’s safe.”  She shuffled her hooves in place in front of the door, chewing her lip, as she thought about all the dangers that possibly awaited her just beyond the door.  After the fiftieth time she imagined being eaten, mauled, or otherwise maimed she gave Angel a sheepish smile before stepping out the door.

She crossed the yard; ducking briefly behind every tree, chicken coop, and large rock, peeking out before moving forward until she came to the strange object.  The sun was just rising over the horizon, the light glinting off the metal body.  She leaned in through the smoke,but leapt back when it began groaning.

“Um, hello.  Are you hurt?”  She squinted against the sun being reflected into her eyes until she could just make out the top dome shape and the two tall white lights on either side.  Her wings sprang open and she fluttered into the air with a smile on her face, “Oh my, you’re just a big old bunny!”

The dome swiveled towards her and eye-stalk locked on.  “DALEKS ARE NOT BUNNIES!  DALEKS ARE THE SUPREME BEINGS!”

Fluttershy approached curiously, “You can talk, oh my goodness, a talking bunny!”  She smiled as she pressed her nose against the eye-stalk.  “And your name is Doll Ecks?  Hi, Doll, my name’s Fluttershy.”

“DIG ME OUT OF THIS HOLE!  YOU WILL OBEY OR YOU WILL BE EXTERMINATED!”          The death ray mounted on the Daleks torso aimed at Fluttershy.

“Oh wow, that’s so lucky,” she whispered excitedly.  She reached out and clamped on the end of the death ray with her teeth and yanked it out causing a small shower of sparks.  “I’ve needed a new whisk ever since Angel Bunny ruined my last one.  Thank you, Doll.”

“BUT,” the Dalek was stammered briefly, “THAT IS MINE!  YOU WILL RETURN IT-” the Dalek was interrupted as she reached out again and tore of his plunger arm.

“And this will come in handy too,” she said blushing.  “The toilet has been acting up and I’ve been too embarrassed to ask for help.  Thanks again, Doll, you’re so sweet.”

The Dalek could only make confused gurgling noises as she approached its side.  Peering into a large crack, Fluttershy gasped.  “Oh I see, you’re not a big bunny at all!  You’re inside here.  Here, let me help you out.”

Fluttershy jammed the end of the plunger arm into the crack and began levering it open further while the Dalek protested.  With one last tug the metal covering fell open and natural sunlight touched the Dalek’s skin for the first time in its life.

Fluttershy came back around and her smile vanished and she clapped a hoof to her mouth.  The Dalek mutant’s tentacles waved out towards her as it’s muddy yellow eye glared while it’s exposed brain thought only of hate.  “BEHOLD THE TRUE FORM OF THE DALEK AND DESPAIR FOR I SHALL,” but Fluttershy was already running back to the cottage.  “YES FLEE!  FOR SOON YOU AND ALL YOU KIND SHALL BE, SHALL BE,” the Dalek trailed off as she disappeared inside the door.

Maybe it was the two hundred years spinning through space, maybe it was feeling the sun and the air for first time, or maybe it was just that pegasus’s smile, but suddenly the Dalek felt very lonely.  It casts its eye downward as it wriggled free of its ruined armored shell.  Settling on top of a large rock, the Dalek looked at the fish swimming in the nearby stream and thought only of how lucky they were to not be like itself.

Suddenly the Dalek was cast into shadow and something soft landed on it’s exposed brain.  Looking up, the Dalek saw the wickered rim of a hat and beyond that was Fluttershy smiling down at it.

“You skin looks really sensitive,” she explained as she lay down in front of it to be at eye level, “so I got you this nice hat.  Do you like it?”

The Dalek reached up with some of it’s tentacles and felt around the hat, stopping at several flowers that were embedded on it’s surface.  “I.  I DO.”
Fluttershy’s let out a mixture between a sigh and a single giggle.  It was the most beautiful sound the Dalek ever heard.  “Would you like to have a tea party, little Doll?”

“I WOULD,” it had no idea what those words meant, nor did it care so long as this strange creature stayed with it.

Fluttershy, Angel, and the Dalek were all seated around a stump with a tablecloth on top and tea set in the middle.  Fluttershy passed out two cups to her friends.  Angel quickly chugged the whole thing down and belched.  The Dalek gripped the cup with it’s tentacles and flung the hot tea at it’s body where the liquid hissed as it was absorbed into it’s skin.

The Dalek slammed its cup onto the makeshift table, “I SAID TWO SUGARS!  YOU CLEARLY ONLY USED ONE!  I DEMAND ANOTHER CUP TO MY SPECIFICATIONS!”

“I’m so sorry I got your tea wrong,” she said picking up his cup.  She then stood up on her hind legs, fluttering her wings for stability, “But that’s not how one is supposed to behave with their friends, is it angel bunny?”  The Dalek glared at the bunny as it shook his head and then stuck his tongue out.

“MAY I PLEASE HAVE SOME MORE TEA WITH TWO SUGARS?”

“AND I APOLOGIZE FOR MY RUDENESS.”

“I forgive you,” Fluttershy said as planted a small kiss on its slime covered body.

“DO NOT KISS ME!  DALEKS ARE CONQUERORS, NOT KISSERS OF PONIES!”  It began rubbing it’s tentacles where she had kissed as though to cleanse itself.

Fluttershy only giggled, “So cute!” 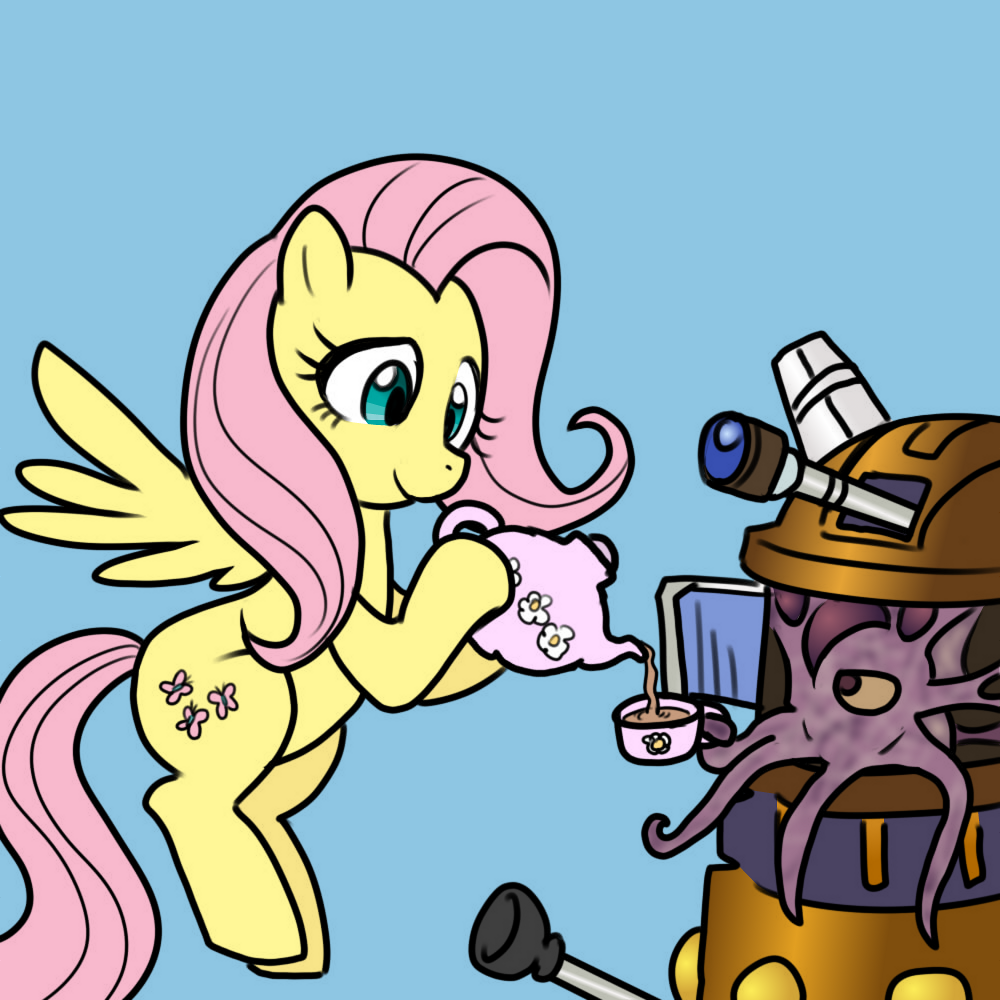