Automated wordcount: 1878
This was file was automatically generated by a google docs scraper, intended for use with e-reading devices. If you wish to have this removed from this list, email ra.llan.pcl+complaints @ gmail.com.

Gotta Put a Smile on Your Face

Rainbow Dash flew through town at such speed that she was just a chromatic blur. Everypony looked up at the rainbow maned pegasus wondering what had her in such a hurry this time. Thankfully none of the ponies that saw her called her down, she just didn't have anytime to stop this morning. Dash looked back to make sure her saddlebags were still hanging on tight as she sped through the sky over Ponyville towards her home, a bowl with a wooden spoon held in her mouth.

She touched down on the “patio” of her home without slowing down and sped through the door. Running over to her kitchen she dropped the bowl onto the counter and undid her saddlebags, letting them drop to the floor.

Dash rummaged through the contents of her saddlebags and brought out a thick pink book with a wooden spoon and eggbeater on the cover. She dropped it onto the counter and started rifling through the pages of the cook book she had borrowed earlier from Twilight, frantically searching for a cake recipe.

Dash propped the book up against the wall of kitchen, so that she could see the recipe without having to stand directly over it and looking down. She then turned to rummage around in her bags again, bringing out two eggs she had gotten whilst at Fluttershy's and placed them on the counter, only to see them sink through the cloud. Dash stuck her head out of the kitchen window and looked on, aghast, as the eggs plummeted to the ground below. She groaned and turned back inside, piling everything back into her bags as she took off, out her door before she even heard the barely audible cracks of the eggs hitting the ground.

“Augh, how could I be so stupid!? Of course the actual food wouldn't stay on the cloud, they aren't enchanted like Fluttershy's Bowl and Twilight's cookbook!”

Dash conked herself in the head a few times as she flew back to Ponyville, working up the nerve to do what she now needed to.

Rainbow Dash knocked on the door and waited, grimacing as she heard a crash come from inside as somepony knocked something over on their way to opening the door. The door whipped open as the pony inside pushed it open, Dash barely jumped back in time, scowling as she turned back to face the pony.

Dash closed her eyes and groaned, hoping that she could get through the next few minutes before she forced herself to leave.

“Hey there Pinkie Pie, I was wondering if I could borrow your kitchen fo..”

“Oooh!!! Watcha making!?” Pinkie asked as she suddenly had her nose pressed against Dash's.

Dash took a step back and rubbed at the back of her head as she thought about what to tell Pinkie.

Pinkie Pie gasped and hopped into the air. “A Secret!?!? No worries, your secret is safe with me! Cross my heart and hope to fly, stick a cupcake in my eye!” Going through the gestures that always accompany the Pinkie Pie promise whilst still hopping. “And of course you can use the kitchen!” Pinkie stopped hopping for a second as a thought crossed her mind. “Wait a second, you don't know how to cook Dashie. Ooh Ooh Ooh!! Do you want some help? Do yah!? Do yah!? Do yah?!” Bouncing with each of her last questions, emphasizing her excitement.

Dash sighed a little and looked away as she answered. “Well you see Pinkie, I think I'd rather work on this on my own. It's... special.”

Pinkie Pie turned around and bounced back into the kitchen of Sugar Cube Corner, stopping long enough to see Dash walk up to the counter before she bounced away to the front of the store to see if anypony was waiting to buy treats.

Rainbow Dash sighed as she turned her head to pull the bowl and spoon out of her bag and set them on the counter, then slipping off the saddlebags as she pulled everything else out and set it all on the counter, glad to see that none of it was falling through. Dash chuckled at the thought of the flour sinking through the solid counter top as she walked over to the fridge to grab a couple of eggs. Sure that they wouldn't be missed in a bakery, they probably had plenty more.

Dash placed the eggs next to the bowl, then propped the cookbook up on some kind of stand that seemed like it was meant to hold books open. She looked over what ingredients the cake recipe called for and tossed everything in as she read, completely forgetting that the eggs had to be cracked and only the insides used.

Satisfied with the concoction Dash grabbed the wooden spoon in her mouth and stirred everything in the bowl. Picking up the bowl she moved over to the oven, carefully opening it with a hoof before she placed the bowl on the middle rack. Closing the door Dash leaned forward to look at all the little knobs on the front.

Dash smiled as she pressed her hoof on a small red button that was conveniently labeled as “Bake a Cake”. Satisfied, Dash turned back to her the countertop and began cleaning up, putting what wasn't completely used back into the fridge for the Cakes and Pinkie to use later. After cleaning up the kitchen Dash sighed, leaning against the counter, her ears perking as she herd a ding come from oven. Trotting over to it, grabbing a mouth mitt on the way, she pulled the oven door open and carefully pulled the cake out.

Rainbow Dash groaned as she set it onto the counter, looking down to see that the cake was a muddy brown mess, pockmarked with eggshell fragments. Realizing her amateur mistake she threw the failed cake into the trash and washed the bowl before starting over. Making sure this time to remember to crack the eggs on the counter and opening them over the bowl so that their contents would fall into the bowl, hopefully without any eggshells. Dash continued the process, this time following the instructions of the cookbook,which she had overlooked entirely before. Finally putting it all into a caketin like she should have the first time around. Collapsing onto the counter she just waited, taking a breather from all the work she had done. Dash began imagining some new moves that she had been wanting to try out, disappearing into the land of her imagination.

Rainbow gasped as she looked at the clock tick-tocking away over the kitchen sink. Turning to the oven she threw it open and grabbed the cake with a mouth mitt and dashed out, telling herself that she'd come back to clean up her mess later. Flying as fast as her wings could take her with a hot cake tin held in her mouth she flew back to her house. Not bothering with the front door she just flew through the kitchen window and dropped the tin on the counter, too much in a rush to even sigh in relief as it stayed fast, clearly enchanted to sit on clouds. She searched through her cabinets in a hurry, looking for a plate that was big enough to hold the cake.

Finding one she dropped it onto the counter and gasped in pain as she turned the tin over onto the plate. Having forgotten that it was probably still oven-hot even after the flight. Not paying the stabbing pain of the burn any heed she pulled the tin off the cake and tossed it into her sink as she turned to grab the finishing touches from her saddlebags.

“Aw, Horse Apples!” She shouted as she realized she had left them back at Pinkie's. Scrambling back to the counter she rummaged through the drawers, looking, hoping that there would be at least one.

“Ah-HAH!” Dash mumbled around the candle that was now gripped in her teeth. She turned and stuck the candle into the center of the cake, striking a match that she had found alongside the candle on her hoof she lit the candle. Letting out a relieved sigh as she dropped the match into the sink, watching it fizzle before sinking to the ground in exhaustion.

Dash's throat seized up in surprise as she flailed for a bit, getting herself back to her feet as she grabbed the plate and ran out to the foyer. Just barely able to see over the top of the cake she saw Scootaloo dropping her saddlebags in the corner by the door, and smiled as she saw Scootaloo turn around and gasp.

Rainbow Dash grunted as the smaller filly tackled her. Gasping as she saw the cake land on the floor, somehow landing with the plate down, surviving.

Rainbow Dash chuckled and nuzzled Scootaloo in return, turning to look at the cake. “Well how about it kiddo? Blow out the candle and make a wish.”

Scootaloo nodded and stepped over to the cake, leaning down to blow the candle out before taking a bite of it. Dash looked on expectantly and cringed when she saw a look of disgust play across Scootaloo's face.

“Blargh!” Scootaloo shouted before spitting out a half chewed piece of cake. “There's eggshells in there!” Dash looked closely and indeed saw that there were the telltale white fragments of eggshell.

Falling over Dash broke into laughter, her hooves holding her stomach as she laughed louder and louder.

“Well of course there are eggshells! Who do you think I am? Pinkie Pie!?”

Scootaloo joined in the laughter, jumping back onto Dash as she started to tell her about her day. 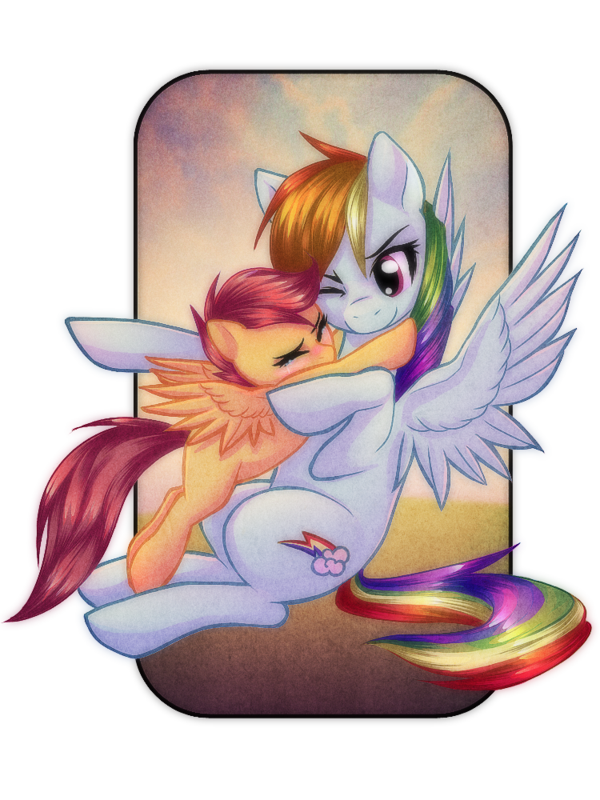 I was raring to get something done for that speedfic contest thingymajig that Cereal hosted a few weeks back. I came home early from BroNYcon just to be able to participate. I’m rather glad I did. I wasn’t planning at all to add another chapter to my own continuity, other than the one I had promised in the comments of my first fic. Yet here it is, after some refinement and fleshing out to submit it as a oneshot, another glimpse at the life of Scootaloo and Rainbow Dash.

I realize that this installment still leaves many questions unanswered (Such as why Scootaloo is living with Rainbow Dash), but I promise that they will be answered. Good stories can be written without any background info, I rather enjoy forgetting about trivial matters such as those when reading some other fics in the Herd. Not to say that I completely ignore canon and background info, but sometimes it’s nice to just sit down and read a good story, y’know?

I hope you all enjoyed this one, as well as Fly Away.

I hope you guys come back to read my final Scootalove fic as soon as I’m done with it.