Automated wordcount: 1875
This was file was automatically generated by a google docs scraper, intended for use with e-reading devices. If you wish to have this removed from this list, email ra.llan.pcl+complaints @ gmail.com. (Author’s note: Steven Magnet is the name that YouTube’s automatic closed-captioning system gave to the mustachioed sea serpent from Friendship is Magic, Part 2. This story is inspired by a request on Ponychan for a Steven Magnet fic. See end for inspiration - spoilers!)

It was a wonderful new day in the Everfree Forest. How could it not be when one was so gorgeous?, thought the serpent Steven Magnet, rising from beneath the gently burbling river to look at the world above. The wind was coming from the direction of the pony village, carrying scents of apples and baking, and Steven just thought he could make out a blue dot in the sky keeping the few clouds in the sky from passing above it. The parasprites were buzzing merrily above, at least until an incautious swarm was licked out of the air by the long sticky tongue of a sprite-eater, while the distant crash of falling trees suggested the Ursa Minor was out to play again.

He looked down at the river, its calm surface mirroring back his impeccable purple scales, marvellously styled orange mane and luxurious moustache.

“Oh, I’m looking simply fabulous today,” mused Steven, turning his head this way and that, admiring his reflection, until suddenly a frown crossed his snout. “I – wait, is that a hair out of place? Oh, great and glorious Celestia, this must be fixed immediately!” Pulling a large comb from under a rock, he carefully placed the aberrant strand back into place. “Perfect, just perfect!”

Ripples from downstream warped Steven’s reflection, interrupting his reverie. A shoal of fish were swimming hurriedly in his direction, prompting Steven to duck his head back under the water.

“Coming to see me, hmm? Well, I suppose I always have time for admirers. I can hardly blame you all. I only ask that – ahem! – you don’t touch the mane. Once tousled, it’s, it’s a beast to tame again, I can tell you that! So, who –“

The fish swum on, ignoring Steven, save for the smallest. Turning briefly from the back of the shoal, she called, “It’s awful! Get away!” She immediately flicked her fins and turned back, racing to catch up with the others.

Steven stared at the retreating shoal in alarm. “Whatever can they mean?” he cried to himself, “I look beautiful, nay, gorgeous! I’ve even seen that young filly from the town, the orange one with tiny wings, come to admire my grandeur. No, they simply cannot mean me.”

“But if not me, then what? Whatever it is, it must be double-plus-unfabulous to distract any creature from me!” It simply would not do for anything to be shooing away his potential fans. Checking his visage once more in the now-becalmed river, he gave himself a thorough nod of approval before heading down river, towards the source of the unfabulosity.

The closer Steven Magnet swam to the mouth of the river, the less fabulous it became. Splatters of ink marred the previously-pristine river bed, reeds lay broken, and tangles of seaweed wrapped around the remaining foliage. More than once, one of Steven’s arms caught on the disgusting tangles, and he had to pause to carefully extricate himself while minimising contact with its slimy surface, his distaste fully evident. Hermit crabs’ shells lay smashed on the gravel, while carefully constructed nests were trashed and tarnished. Almost none of the river’s residents remained here; most either passed Steven wordlessly, swimming upriver, or cowered behind rocks, afraid to show themselves.

“Urgh. I simply have to find the source of this horribleness soon. I cannot take much more!”

“Oh, really now? We might be able to help with that.” From around a bend in the river, not far from the sea, emerged three most unfabulous monsters: a large squid, with blood-shot eyes and terribly blotchy tentacles, flanked by two sharks, one with a unflattering wounds across his eye and snout, and the other with a skull crudely carved into his underside. The squid turned a leering eye towards Steven. “This is our part of the river now, and we’ll do what we please, won’t we?”

“Uh, yeah, I guess so!” agreed the second, after a few moments’ thought.

“So, you’ll be a good serpent and flip off, won’t you?” concluded the squid, extending a tentacle menacingly towards Steven, who recoiled in disgust.

“Certainly not! You – you hooligans! In the name of all that’s fabulous, I must simply insist that it is you who must leave at once!”

The squid laughed cooly, prompting the two sharks to snigger uncontrollably for several seconds. “Heh, I don’t think we’ll be taking any orders from a pretty-boy serpent. Scars, Skulls – take care of him, will you?”

Steven burbled in rage as the two burly sharks came up alongside him. “But – no! Get away, ruffians!” He attempted to bat one of the sharks away, but the other came perilously close to his hair, prompting the serpent to cower to protect his glorious locks. Abruptly, he felt the something icky and slimy wrapping itself around his body. “Oh, I beg of you, stop! I simply can’t abide this!”

The squid appeared from behind Steven’s coils, trailing tough strands of seaweed , which he looped around Steven’s arms and – gasp! – over his mane, tying the tendrils together deftly with his tentacles. “Heh. I think that will keep you... out of our hair!”

The two sharks again descended into sniggering as the three swam upriver, leaving Steven trapped in the seaweed.

Tossing and flailing his coils, Steven turned the river into a tumultuous froth, but the clinging seaweed was not dislodged; the squid clearly knew his knots. Nor could Steven untangle himself with his hands, bound uselessly as they were against his body.

“Oh, somebody, anybody! Help me!” he cried, tossing his head in anguish, but there were no creatures around to hear, the few who remained having fled from the terrorising trio.

Eventually, having exhausted himself struggling, Steven lay down on the river bed, defeated. “Oh, my hair, my beautiful hair...” He stared blankly at the bank, until a metallic glint caught his eye. It was half-buried in the silt underneath a rocky ledge, and seemed to be some kind of knife – perhaps dropped by somepony, and washed down the river? The waterlogged remains of a parcel lay around it; a delivery gone wrong, maybe. However it had come to be there, the fabulous serpent saw in it his means of escape.

As he concentrated, Steven’s extravagant moustache begun to twitch, while the knife started to vibrate slightly. For Steven Magnet was more than a name: his moustache, if he willed it enough, could become powerfully magnetic. This was not typically helpful to a serpent, he acknowledged, but it occasionally came in useful for holding his styling equipment, which might otherwise become washed down river, or for acquiring half-buried baubles without getting his claws dirty.

He closed his eyes tight, focusing on the task at hand. “Go... go... magnet... moustache...” he mumbled, moustache tingling as the knife was gradually drawn out of the mire. With a metallic scraping sound, it suddenly arced through the water, slicing through the seaweed bindings. Steven ducked to protect his mane from further damage, and quickly cast off the slimy tendrils.

“Oh, how ghastly this all has been! Causing all this untidiness, trapping me with such icky seaweed, and, for shame, messing up my hair! I simply must redress these crimes against fabulosity!”

Steven swam down river once again, his marvellous coiffure almost returned to its former glory following some emergency maintenance. This time, however, he was accompanied by the fish he had met earlier, carrying a large basket between them. He shuddered at the chaos the invading sea creatures had made of his river, but, steeling himself, continued on to its mouth.

“Ahem! I’m looking for a Mr. Squid, Esquire, and his companions, Messrs. Scars and Skulls? I believe we have an appointment?”

The trio skulked out from behind a rock; a crab scurried out shortly afterwards in the opposite direction, seemingly terrified for its life. “Heh, look who it is. Mr. Pretty-Boy Serpent is it? I didn’t think we’d meet again.”

“Steven Magnet, if you please. I’m so sorry, but, look at the state of you all! I simply don’t know how you can go about looking like that. I mean, those scars, and such horrible blotches! I just couldn’t live without giving you a makeover.”

With a motion of his arm, Steven sent in the fish, which dropped the basket and pulled out several long ribbons festooned with bows and bells, each supported by several fish. The serpent himself withdrew three extravagant wigs.

“Woah, we don’t need any of that weird girly stuff,” objected the squid, backing away. “Scars, Skulls, stop them!”

The sharks each swam after one of the fish, knocking them away, but they were greatly outnumbered by two dozen fish carrying extravagant ribbons, and their efforts only succeeded in delaying their inevitable entanglement. Scars and Skulls were soon draped with fancy garlands, tying them to each others’ backs, while the fish easily evaded the bound thugs.

“Enough of this nonsense!” shrieked the squid, firing a salvo of ink at the fish, temporarily blinding them, as he swam directly towards Steven. “I am not being humiliated by some titivation-crazed ninny!”

Steven whipped his tail-tip at the squid, creating a shock wave in the water which momentarily dazed him. The serpent firmly fastened a large wig over the creature’s long head, covering his eyes but giving him a mane to be proud of.  “One should never, never ignore the benefits of maintaining a good appearance,” he noted, drawing out another ribbon with which to tie the struggling squid’s tentacles together in a bow. “And, well, that horrid seaweed you tied me up with, it simply did not match my scales. How hard can a little accessorising be? This is far more fetching.”

As the ink cleared, Steven prettified the sharks with his other two wigs, despite their snarling within their bonds. The tough trio certainly looked more fabulous like this, he thought; admittedly, not in his league, but he could hardly blame them for their inability to attain such perfection.

“Oh, you all look so positively gorgeous now, but I’m afraid I simply have to leave. I’m sure that some friends of yours will be along soon to admire your makeovers; do be kind, and mention my name, hmm?”

Steven and the fish turned and left, leaving the trio fuming, be-wigged and festooned in gaily decorated bunting.

“I’ll get you next time, Magnet! Next time!”

“But, boss, when the other sharks find us like this, they’ll be laughing at us for –“

It was another wonderful new day, and Steven Magnet was once again enjoying the bright sunshine glinting off his iridescent scales and accenting his mane, now fully re-styled and entirely fabulous. As he swum under the bridge nearest to where the river passed near Ponyville, he once again saw the orange, winged filly looking out for him.

Steven tossed his mane and smiled winsomely. Yes, he truly was magnetic, and in more than one way at that. 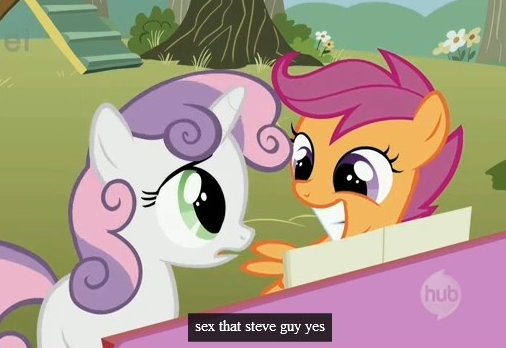