Attempted automated wordcount. Please use LibreOffice/MSOffice for an accurate count: 2637
thanks, author! If you wish to have this removed from this list, email ra.llan.pcl+complaints @ gmail.com, making sure to provide proof that you are the author. 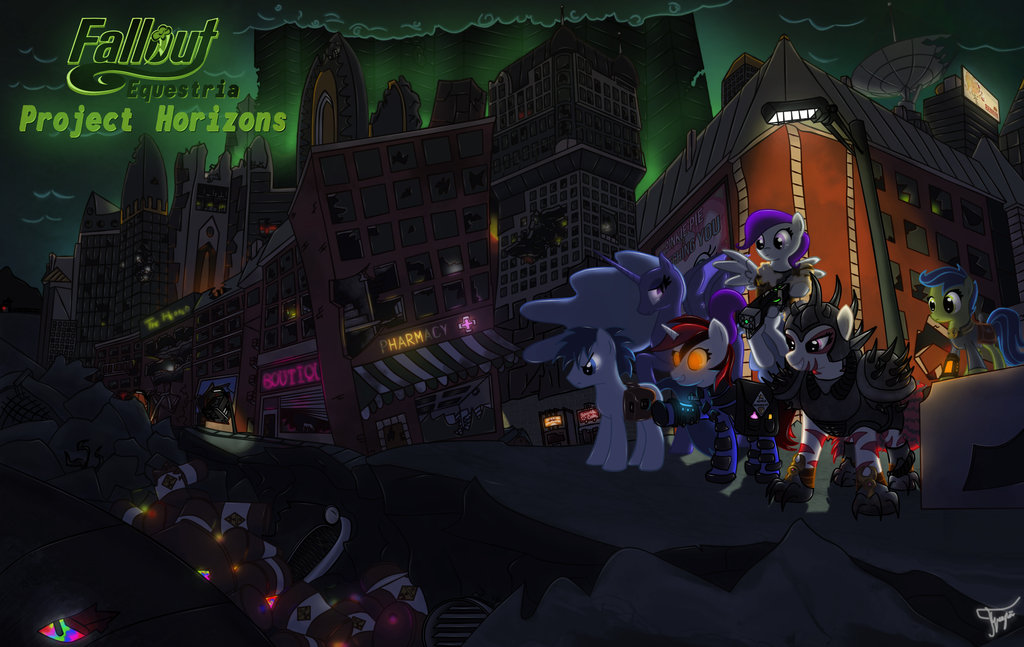 Welcome to the Project Horizons index page! Chapter links can be found below.

Note: While the story is written as a continuous narrative, here it has been split into volumes due to its length. Feedback, discussion and constructive criticism of Project Horizons are encouraged at the Project Horizons page on Equestria Daily or the new Cloudsville thread.

Once upon a time, in the magical land of Equestria, the virtues of friendship were cast aside in favor of greed, suspicion and war. Finally, the world itself was ravaged by the fires of countless megaspells; civilization, as it once was, ceased to exist. The city of Hoofington, however, did not die easily. Even with the world shattered, the ominous, irradiated towers of the Core remained standing. Formerly the center of Equestria’s wartime research and development efforts, the ruined city now slumbers, a place of poisoned secrets and perilous treasures. One unicorn mare, already burdened by guilt and self-doubt, finds herself thrust into the center of Hoofington’s web of intrigue. With a diverse and dysfunctional band of companions at her side, she must unravel a mystery over two hundred years in the making -- if the trials of the Equestrian Wasteland don’t unravel her first.

Volume One - The Security Mare

Blackjack, an incompetent security mare from the dystopian Stable 99, suddenly has her monotonous life turned upside down when the stable is invaded by vicious raiders. In a daring plan to save her home, Blackjack flees the stable with EC-1101, a valuable data file. With an enormous price on her head and a deadly cyberpony out for her blood, the struggle to survive in the blasted ruins of Hoofington tests her resolve and courage to their limits.

“Once upon a time, in the magical land of Equestria…”

“In the end, we all have to trust in something…”

“I know lots of other ways to take care of you.  Don't worry.  You're gonna get better.”

“Are you sayin' my mouth is makin' promises my legs can't keep?”

“Oh yeah.  You think you can do better, cowgirl?”

“THAT was a truly feeble performance.”

“That wasn’t the doozy?  How could that not be the doozy?!”

Free of pursuit for the time being, Blackjack sets to finding out more about the mysterious data file that the monstrous Reaper, Deus, invaded her home stable to find; a task made easier by powerful and enigmatic new allies. More and more, however, thoughts of her past mistakes weigh heavily on the Security Mare’s conscience, and the hunt for answers soon transforms into an impossible quest for redemption.

“It’s all secrets and lies with those ponies!!”

“It seems like the only thing royal about you is that you are a royal pain!”

“Does my crown no longer count, now that I have been imprisoned for a thousand years?”

“You’ve got to get into the spirit of things!  After all, this is your new home!”

“When all the truth does is make your heart ache, sometimes a lie is easier to take.”

“It's the horrifying story of the messy inconsiderate ghost, who irritated everypony within a hundred miles!  OoooooOOOwwwwOOOoo...”

“I was gonna say ‘In all of Equestria,’ but that might be gilding the lily.”

“Curses are artificial, fake magic.  It’s conjured with potions and incantations, all smoke and mirrors meant to scare.  But curses have no real power; they’re just an old pony tale.”

“Bah!  Trixie is exhausted from performing feats beyond imagination.  Begone with you until morning!”

“Thanks guys, you’re all great friends too, even when I don’t understand me!”

“What I meant is, you should get to know these tribes and decide which ones you like and which you don't!”

“Just because you’ve failed the sonic rainboom a hundred thousand times in practice doesn’t mean you won’t be able to do it in front of an entire stadium full of impatient, super-critical, sports-fan ponies.”

“Though quarrels arise, their numbers are few.  Laughter and singing will see us through.”

Events build towards their inevitable climax in Equestria at large. Meanwhile, in Hoofington, rumors spread far and wide about the sudden disappearance of the notorious Security Mare. Strange groups accumulate outside settlements throughout the region, bearing an ominous standard. Life-stealing Enervation fields are on the rise, and something terrible stirs beneath the ruins of the Core. One way or another, the fallen city’s dark secrets will soon come to light, and dramatic changes are in store for a certain group of friends...

“This is the greatest day ever!  We need to celebrate your birthday, babies, ‘cause you were just born today!”

“And I saw the most amazing, most wonderful thing I’ve ever seen.  I poured myself into learning everything I could about magic.”

“Cross my heart and hope to fly, stick a cupcake in my-- ARRRGH!”

“You should see the looks on your faces!  Priceless!”

“I hope you’re happy!  Both of you!  You’ve ruined my very first slumber party.  The makeover, the smores, the truth or dare, the pillow fight!  I mean, is there anything else that could possibly go wrong?!”

“Biting off more than you can chew is just what I’m afraid of.”

“So... got any problems, troubles, conundrums, or any other sort of issues major or minor that I as a good friend could help you solve?”

“I dunno why we have to wear these things either...”

“Aren’t we wearing them for fun?”

“Listen up!  Smoke is spreading all across Equestria.  But don’t worry, I’ve received a letter from the Princess informing me that it is not coming from a fire.”

The trials of the Wasteland wear everypony down with time, but with shadowy agendas coming to the fore and EC-1101 approaching its final destination, there’s little opportunity to rest. Pursued by the Harbingers, the Remnant, the Enclave, and worse, life just keeps getting harder. And as she faces these challenges, the bearer of Equestria's destiny finds herself doubting the very quest upon which she's embarked.

“You have a lot to think about.”

“I am going for a hooficure and that is that!”

“You are not going-”

“Hey, you know what this calls for?”

“The war brought misery and death all over the world.  I sure hope that something like that never happens again.  But from what I’ve seen, there’s not much hope for ponykind.”

“Oh, my fortune telling has nothing to do with my Pinkie sense!  It’s only good for vague and immediate events.  Like that, see?  ...where did that even come from?”

“Stay back!  I just had myself groomed!”

“I can’t believe we’re finally here. With all that we’ve imagined, the reality of this night is sure to make this... The Best Night Ever!”

“You and I have some unfinished business.  My magic’s gotten better since I was here last.  And I’m going to prove it!  Me and you.  A magic duel.  Winner stays, loser leaves Ponyville forever!”

“I simply cannot imagine why the pegasus ponies would schedule a dreadful downpour this evening and ruin what could have been a glorious sunny day.”

“Here it is: the greatest city in the sky!”

“You saved my reputation with Princess Celestia, and more importantly, you saved Ponyville! ...Or not.”

Chapter 62 - Between the Wolf and the Lion, Part One

Chapter 62 - Between the Wolf and the Lion, Part Two

“I’ve learned that one of the joys of friendship is sharing your blessings, but when there’s not enough blessings to go around, having more than your friends, can make your feel pretty awful.  So, though I appreciate the invitation, I will be returning both tickets to The Grand Galloping Gala.”

All across the Wasteland, sunshine and rainbows burst across the sky, and the Book of LittlePip, of the Lightbringer, gives hope to many who had thought it lost forever.  Troubles still beset the peoples of what was once Equestria, but now the future, like the light from above, is bright.  Except in the Hoof.  There, no rainbow rings were seen; there, the clouds are as thick as ever, and the rain falls upon Enervated soil.  In the Hoof, the Security Mare, for one brief moment, parted the clouds and let the city see the sky... and then she fell into the Core.  After three months of silence, she is dead.  She must be.  But...  Even if she is...  There are Things stirring in that towering necropolis, and the world should hope that she is one of them.  For if she is not... the Hoof may be only the beginning.

“To retrieve your missing Elements, just make sense of this change of events.  Twists and turns are my master plan.  Then find the Elements back where you began.”

“Hello everypony! Did I miss anything?”

“Well, there’s something here about a dragon, the kingdom falling, chaos reigning… Okay, apparently it was all because the prince and princess were so lost in each other’s eyes that they couldn’t perform their royal duties.”

“No. You won’t. You may have made it impossible for Shining Armor to perform his spell, but now that you have so foolishly revealed your true self, I can protect my subjects from you!”

“We must escape before it’s too late

Find a way to save the day”

“Sure, no problem! So long as Horizons doesn’t fall before you can get there! Which I’m sure it won’t!”

“Darn it! Now you got me acting all sappy!”

“You guys have gotta get me out of here! I’m gonna climb the walls!”

“Ooh, just like a spider! Did the crash somehow give her super-duper spider powers?”

“Forget it, Twilight. I know what you’re up to. The second I go in, you’ll have your little minion Spike come and take Tom!”

“I have to find a way… To make this all okay… I can’t believe this small mistake…  Could’ve cause so much heartache...”

“An exercise in rhetoric.”

“Never fear, girls. We have each other!”

“What? My dream ended… happily? That. Cannot. Happen!”

“Once upon a time, in the magical land of Equestria...”

Cloudsville's Fanfiction section, within which are, generally near the top, the Project Horizons primary forum threads.

Note: The files below are updated independently and may not be up to date.

Note: The files below are updated independently and may not be up to date.

Project Horizons .epub - With thanks to Scorch_Mechanic.

Project Horizons LaTeX ebook .pdf - With thanks to thePowersGang.

Project Horizons Russian translation .fb2 - With thanks to joltius.

Snipehamster -- 11/3/13 -- Due to internal disagreements, I’ve resigned from the editing team. Ownership of this document has been passed to Somber.

Snipehamster -- 21/11/12 -- A passage has been added to the tunnel scene in Chapter 39, which should set some ground for the future and clarify the events of that chapter just a little. Apologies for the sporadic chapter releases; real life obligations have eaten into writing and editing time quite substantially.

Snipehamster -- Hub Page Release -- Testing, testing, one two three. This hub page was strongly inspired by the fantastic hub page of Murky Number Seven, by Fuzzy. A story I highly recommend. Also, for those wondering about when, specifically, new chapters of PH are released: each chapter typically takes 1-2 weeks to write. Editing sessions take place during weekends due to timezone conflicts and work schedules (Somber and Hinds live in the US; Bronode and I live in the UK), so new chapters are almost always released on saturdays and sundays.