Automated wordcount: 1219
This was file was automatically generated by a google docs scraper, intended for use with e-reading devices. If you wish to have this removed from this list, email ra.llan.pcl+complaints @ gmail.com.

Disclaimer: if you can read this, you probably don’t need glasses. Tea, Earl Grey, Hot. May you be touched by His Noodly Appendage.

“Hiho Derpy,” said Stamp as he trotted towards Derpy across the post-office floor, “what’re you up to this morning?” Usually Derpy would have collected the letters from Stampy, but this time she was busy sorting them herself...

“I’m deliverin’ muffins!” said Derpy happily, going back to counting. Derpy had tied a string to every letter, and a muffin to every string. They were Hoofentine’s letters, and Derpy had gone that extra little bit for her friends. Stamp smiled and shook his head, walking away. Then he turned, as Derpy headed out the door and he noticed a peculiar rope ladder snaking down from on high.

A ladder? A rope ladder? Why in Equestria... he thought to himself. Then he blinked, Derpy was climbing. Derpy had an overfull mailbag. Derpy...was Derpy.

“Oh my goodness...Derpy? Derpy! You come down here this minute and explain what you’re up to!”

“Can’t stop now Mister Stamp, the mail’ll be late an’ then I’ll get in trouble an’ Momma don’t like it none when I get in trouble...”

“But what are you doing up there?”

Derpy looked down and gave a giggle, “Silly! I can’t take off because the muffins are so heavy! So Imma get a run up! A helpful unicorn made me this magic rope so’s I can climb up to the clouds....”

Helpful my left foreleg, swore Stamp under his breath, “Derpy dear...if you can’t take off, don’t you think you might have trouble flying?”

“Oh...” said Derpy, taking a running jump and leaping into the air, “I didn’t think of thaAAAAAAAAAAAAAATTTTTTT!”

It was too late, Derpy had launched herself into the air, and spiralled out of control flapping madly towards the center of Ponyville. She just about made it to Sugarcube Corner, where she barelled through the window and caught herself right in the eclaires.

Pinkie Pie looked up from where she had guiltily been tasting Mister and Misses Cake’s wares. They were pretty good, but she wasn’t sure if they were good enough. She had a fever, and the only prescription was more cakes.

“Derpy? Oh that was a wonderfully zoomy spinny crashy crasheriffic entrance this morning! Do you have mail for me?”

Derpy lifted her head up sheepishly from under a pile of cakes and letters, “muffins!”

“Oh so you do! Muffins make everything better. I can see why you like them. But if I may say, that was such a crasheriffic landing that I’m a teensy weensy li’l itty bitty bit worried you might have hurt yourself...”

Derpy stood up carefully, making sure not to get her overloaded sacks any more damaged than they appeared already and then stretched all four legs and then both wings. She winced when the right wing wouldn’t extend properly, “Oh no, Miss Pinkie, my wing’s all busted! Now I’ll never be able to deliver the mail-muffins!”

Pinkie Pie checked out the wing to the best of her abilities - nothing appeared broken, “ooh, you’ve got to work on that landing if you’re going to try that again...I think you need to go see a nurse! Oooh, I know! I can deliver the mail today!”

“Sssh,” said Pinkie, “It’ll be a secret, but fun! Just let me take these...I’ll be careful! You go see a nursey and I’ll see to the mail. And I promise - Pinkie Promise! - not to eat any of the mail-muffins. Not the ones that don’t belong to me, anyway...”

Pinkie Pinkie-bounced out of the cake-shop, the overly-laden bags barely clearing the floor with each hop, skip and jump, and disappeared to where Pinkie Pie disappeared to when not in public. Derpy blinked, one eye spinning lazily off, and then stood up and stretched, wincing again as the wing hurt. She then trotted out of Sugarcube Corner and headed dutifully to the nurse.

Mister and Misses Cake trotted back in to find their shop in less disarray than usual, most of the cakes were still in place and only one window had been broken, with what appeared to be pegasus feathers left in a small heap. Pinkie Pie was getting better at looking after things, they agreed.

Meanwhile, Pinkie had come up with a cunning plan. She’d tried the patented whirly Pinko-Copter, but the letters had been too heavy. Or was it the muffins? She’d momentarily considered eating a few - just a few! - but then she remembered her Pinkie Promise to Derpy. She thought, and pondered, and schemed, and came up with a simply simple wonderfully wonderful easy-peasy plan. And filled a loooaaaaadddd of balloons with helium, and tied them to the bags, and to her. When there were enough balloons, she was lighter than a feather. Giving a giggle, she hopped, skipped and jumped waaaayyyyy into the air, and took off. Her specially adapted Pinkie Tail Propeller Hair-Gel solution worked perfectly, and as she swung her tail through the air with a swoop-swoop-swoop noise she propelled herself through the clouds like a giant pink flying ball of candyfloss.

“MAIL-CALL!” she shouted from on high, tying off each Hoofentine’s letter to a single balloon and floating it down to the recipient, weighed down by the muffin. A few ponies had to swap letters if they were too close, and AppleJack had to collect hers from a tree, but all in all it worked quite well. Pinkie found her Hoofentine’s letter, and happily ate the muffin that came with it perched on a cloud. It wasn’t quite so easy for her as it was for Dash, but she managed.

“Speaking of Rainbow Dash,” said Pinkie to herself, “Dash! I got your letter! I mean a letter for you!” She propelled her tail one last time, the sun was going down by now and the stars were coming out. With just enough balloons left to keep her hoist into the air, she located and floated next to the lounging blue-furred rainbow-haired pegasus.

Dash looked up, and couldn’t help but laugh, “Oh Pinkie, you are so random! What’ve you got for me?”

“It’s a Hoofentines letter! Open it, who’s it from?”

Pinkie’s normally happy-go-lucky countenance clouded over, like a strato-cumulo-nimbus - at least that’s what she thought she was going for, she was pretty sure, “that big ol’ meanie meanie no-good meanie pants. What does she want?”

“Oh Pinkie,” said Dash, wiping a tear surruptitiously from her eye, “she said she’s sorry, and wants to know if I can forgive her.”

Pinkie snorted, and then relented, “I dunno Dash, it’ll take a lotta sorry from such a big meanie, meanie...” she stopped when Dash looked at her, “she’ll have to mean it.”

Dash suddenly giggled, “she did ‘mean it’, that was the problem!”

Pinkie stopped for a second, just a second, and then started laughing and guffawing so hard her balloons started to burst, one by one, sending her dropping towards the ground, where eventually she was rolling with mirth, “She meaned it!” said Pinkie in between giggles, “She meaned it!” 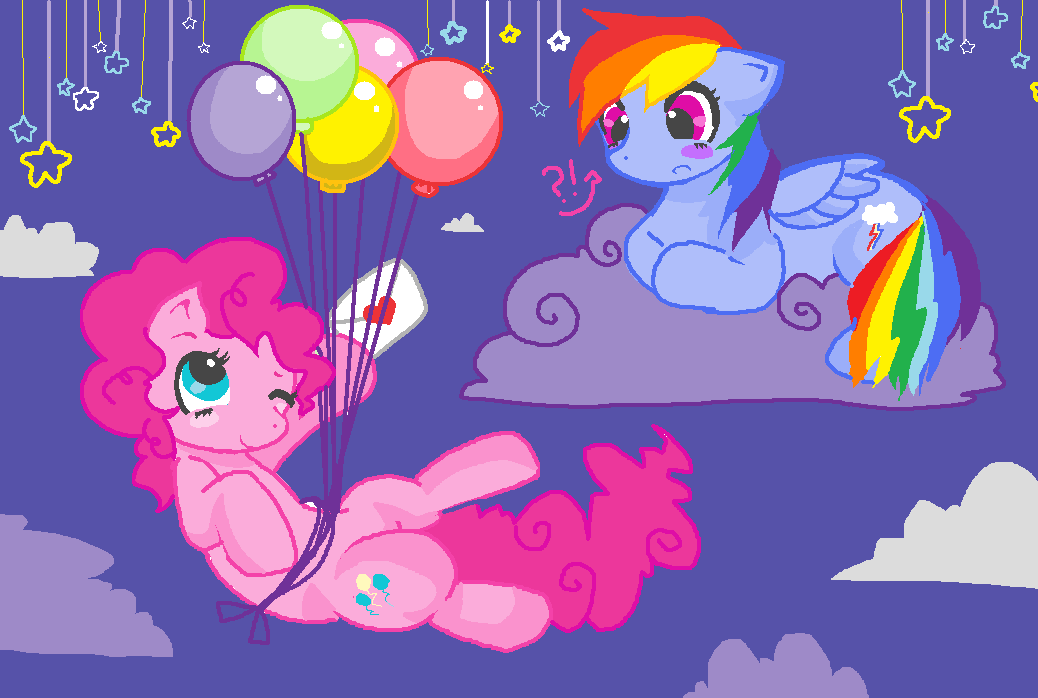